As a University of Illinois research area, the flora and fauna of the park have been extensively studied for many years. These studies include, but are not limited to, periodic forest inventories, breeding bird communities in various community types and changes in bird populations over time, movement patterns of farmland deer, small mammal population ecology, and wildlife radio-tracking investigations. 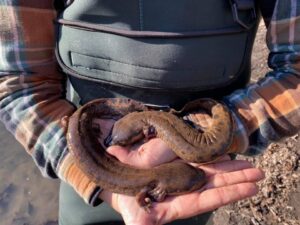 Pictured: Allerton Natural Areas Manager Alex Lourash holds two female mudpuppy salamanders as he assists the Illinois Department of Natural Resources (IDNR) with their 2020-21 Mark and Recapture Survey. This Illinois threatened species lives its entire life underwater; they are great indicators of water quality and play a very important role in our waterways.

Marissa Jones, University of Illinois Springfield graduate student and IDNR Natural Heritage Database Graduate Public Service Intern (GPSI), explains: “The purpose of this Study is to survey known locations of the mudpuppy within the Sangamon River in Allerton Park in an effort to gather baseline data of the species’ population size. In 2016-17, INDR District Heritage Biologist, Eric Smith, conducted presence/absence surveys for the mudpuppy within Allerton Park and confirmed the species presence within the park. The density estimates from the 2020-21 Mark and Recapture Study will support the Illinois Natural History Survey’s (INHS) proposal for a State Wildlife Grant (SWG). INHS intends to use the SWG to fund statewide environmental DNA (eDNA) surveys for mudpuppies and salamander mussels to better understand their populations sizes and distributions across Illinois. Mudpuppies are the only host for the salamander mussel, thus a better understanding of how to protect and conserve the species can also increase the successful reproduction of the salamander mussel. The refinement of mudpuppy sampling protocols across the state is an additional benefit of the regional sampling that will support the future SWG project and overall conservation of the species. Finally, an additional study of this species will further contribute to the existing literature and help form a clearer, more holistic understanding of mudpuppy demographics within the state of Illinois.“

Learn more about this unique creature and celebrate it with the Land Conservation Foundation‘s Annual Mudpuppy Festival! The insect traps you see throughout the woods at Allerton Park are designed to catch beetles.  Specifically, research is focused on the chemical ecology of longhorned beetles (family Cerambycidae).  Cerambycids are a large and diverse group of wood-boring beetles which include numerous current and potential forest and timber pests.  Because their larvae live and feed in the wood of trees, they are difficult to monitor visually.  However, their behavior is very reliant on chemical cues, including aggregation pheromones and sex pheromones.  Pheromone components are often highly conserved within taxonomic subgroups, allowing us to develop lures that are attractive to a large number of species.  Ultimately research is focused on beetle pheromones and improving the detection of exotic long-horned beetles in the future.

Hydrologic connectivity between streams and their floodplains Research Goal: To determine how human alteration to floodplain aquifers has altered the hydrologic connectivity between streams and their floodplains.

Allerton Park will be used as a reference site of an unaltered floodplain for a paired site study. In order to determine the effect human alteration to landscapes for agricultural purposes has had on hydrologic connectivity between rivers and their floodplains, we will compare spatial patterns, frequency, and dominant mechanisms of floodplain inundation within a natural floodplain landscape to one that has been altered for agricultural use. The Sangamon River old-growth floodplain forest located in Allerton Park is both ideal for this study and one of very few examples of an unmodified Midwest floodplain and river reach.

Methods: We will deploy a network of approximately 100 small temperature sensors to determine the locations and timing of floodplain inundation across a portion of the floodplain in the Allerton Park. The sensors will mainly be located on the ground surface in landscape depressions near the Sangamon River. They will be mounted to stakes driven into the ground and encased in protective PVC pipe coverings. A few sensors will be located in the tree canopy. The difference in temperature of the ground sensors relative to the canopy sensors will indicate when a particular sensor becomes inundated. Watermarks on sticks painted with water soluble paint will also be used to determine maximum depth of inundation and will be located near the temperature sensors. We will install about 10 shallow groundwater monitoring piezometers with water level loggers. PVC pipe (2” diameter) will protrude from the land surface 1-2ft (we can paint these brown or wrap them in camouflage tape if that is desired). The data gathered in this field study will inform a hydrologic model of floodplain inundation. In Allerton, we have set up a study to further our understanding of how microbial communities mediate plant responses to changing climates. We are quantifying the effect of mycorrhiza type (AMF vs. EMF), soil microbes, and drought conditions on tree survival. In each plot, we crossed AMF and EMF tree species with soil microbes from dry and wet conditions. Half of all trees were covered with throughfall reduction shelters, while the others had sham shelters.” In 2017, ISAS partnered with Parkland College to bring the first field school to Allerton Park. ISAS staff used magnetometry survey and LIDAR to map ten mounds, known as Samuel’s Mounds. These non-invasive techniques helped determine the spatial layout and condition of the mounds. Archaeologists were happy to discover most of the mounds had been well preserved. Only two of the mounds had been impacted by erosion and historical looting.

One of the goals for ISAS archaeologists in Spring of 2018 was to help plan the restoration of the impacted mounds (see short video https://youtu.be/RMA2m-Vnhig).

“Unfortunately, most of the thousands of mounds that once dotted Illinois have been destroyed by either looting, agriculture, or development.  The Samuel’s Mound group is unusual because the land it sits on was set aside by the Allerton family as a wooded retreat.  Although it was protected from farming it was still impacted by the mound looting that was so rampant in the late 1800s and much of the 1900s.  As our efforts go forward we hope to, at least partially, restore and stabilize the most heavily damaged mounds in the group,” said Dr. Thomas E. Emerson, Illinois State Archaeologist and Illinois State Archaeological Survey Director.

The Parkland College field school will focus their excavation to identify the living areas thought to surround the mounds. They hope to glean more information about the people who lived and built the ten mounds that cover about 1.5 acres along the Sangamon River. ISAS is creating a comprehensive plan for the archaeological interpretation and restoration of the site at Allerton.

The Allerton Archaeological Project is a joint, multi-year research and educational effort by ISAS, the Allerton Park staff, and the University of Illinois to understand the long term cultural history of this uniquely protected segment of over 1,500 acres of the Sangamon River valley, especially concentrating on the poorly known native history.

Chimney swifts are unique little birds with an inability to perch, clinging instead to vertical walls inside chimneys or in hollow trees or caves. But as chimneys fall into disuse across the continent, chimney swifts have been in a long-term, rangewide decline of about 2.5% per year between 1966 and 2015, resulting in a cumulative decline of 72%, according to the North American Breeding Bird Survey.

Maureen Hurd, a master’s student in the Department of Natural Resources and Environmental Sciences at the University of Illinois at Urbana-Champaign, has been conducting research on the abundance of Chimney Swifts and Common Nighthawks in the Grand Prairie division of Illinois, with a goal of better understanding why these aerial insectivores are declining throughout North America. Her hope is that artificial habitats can be designed that will give these birds more nesting options as old chimneys and hollow trees decline.

As part of her research, Maureen has been installing and monitoring several chimney swift nesting towers – including a preexisting nest in the Visitor Center’s chimney above the Greenhouse Café! A camera has been set up to monitor the swifts’ movements in and out of this chimney, and one of the swifts has been tagged with a gps transmitter to observe daily movements. Maureen has also built a chimney swift tower by the farm near Allerton’s north entrance.