Some Monticello High School agriculture students are using Allerton Park as a field school to supplement their classroom curriculum.

“All year we’ve been learning about topics within the field of conservation and outdoor recreation. And now, this is like our field experience. At the beginning of the year we have a forest unit, and now we’re out here looking at the trees,” Rost said.

For example, students learned on an April 19 hike about invasive species and deer herd management, along with other tidbits that included facts about everything from woodpeckers to the habits of turkey buzzards near the Allerton house.

“It gets them out to see what’s here. I wish I’d taken a class like this in high school,” Beccue said. 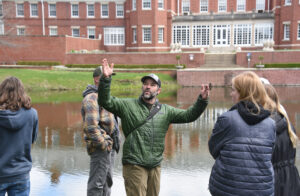 Students learned about the extensive effort since 2004 to get the number of deer to a point where they can survive and the forest would not suffer.

There were about 730 deer at Allerton in 2004, equating to about 163 per square mile, much higher than the 10 to 30 per square mile than helps unsure the sustainability of a herd.

Early on, both archery and shotgun hunting was allowed to get the herd down to between 150 and 250. These days, only archery hunts are allowed for seven weeks each year.

Those wishing to take part must volunteer for 30 hours at Allerton, doing work ranging from invasive species management to helping with event parking.

Beccue estimated around 30 to 35 deer are harvested in the forests of Allerton.

Other topics covered during trips to the park include energy sustainability, bird watching, even a unit 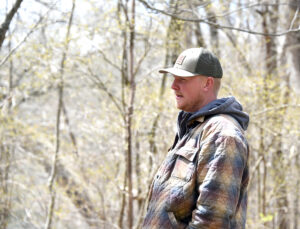 on how researchers studies snake that inhabit the prairie. Binoculars are available for students who want a closer look during the spring hikes.

“We try to always move and point out things,” Beccue added.

“It’s amazing,” said Rost. “Plus, to have Nate and Alex, they know way more than I do so it brings in some experts who take it to the next level for the kids.”

This is the second year the conservation management class has spent time at Allerton. Rost said she got the idea during a visit to Okaw Valley High School.

“Their students get to work with the corps of engineers and go out and manage land out there, so that sparked an idea that we should be doing this too,” she said.