Several talented artists are featured in this year’s (2022) Holiday GLOW. Here is more information on those artists and what is on display during this year’s Allerton outdoor lights show. 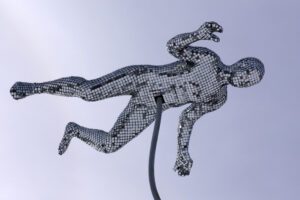 Universe by artist John Bannon can be seen on the Gatehouse Lawn. The installation initially presents as a mirror-ball man spinning atop a radio tower, but upon closer inspection, there is more than meets the eye. Bannon says it would be easy to rely on the cool factor, but the more you look, the deeper you get into the piece: a contemporary model of the universe. The light reflected off the mirrors broadcasts tiny groups of the self-portrait figure in various positions spinning around the piece on the ground. When asked about his art, Bannon says he uses things that are recognizable, like a mirror ball, but changes them to give a different perspective to inspire people not in art to think creatively. 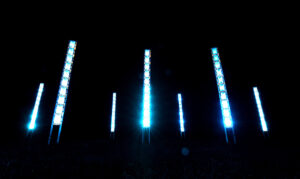 Two installations in the forest on the northeast side of the GLOW walk are by artist Michael Young. Night School is a school of brightly colored metal fish swimming through the air on both sides of the trail. The details of the scales glow and give life to the fish as if they were in motion. Further on the same trail, you’ll encounter Phoenix’s, a series of three aluminum and neon wings in flight.  Young says his pieces are inspired by environmental elements – a beating bird’s wing or bending tree – with the forms open to interpretation.

Artist John David Mooney’s piece Blue Standing Lines is in the Meadow. Using pieces that were originally part of a 52-story high-rise light sculpture, the blue reflective light totems are arranged in two concentric circles. Mooney says the location is the first thing to understand about the piece, activating the crest of the hill so that the meadow has another aspect to it.

The piece also calls to mind the sacredness of the council ring of the people that once lived on this land. Then, as you progress further into the middle, it is as if you are surrounded by a forest of blue standing lines. In a nod to the great landscape architects, and our own Robert and John Allerton, Mooney says to create that moment for the community that already exists in a place is the magic part.

Come out to Allerton Park and enjoy these special art installations!