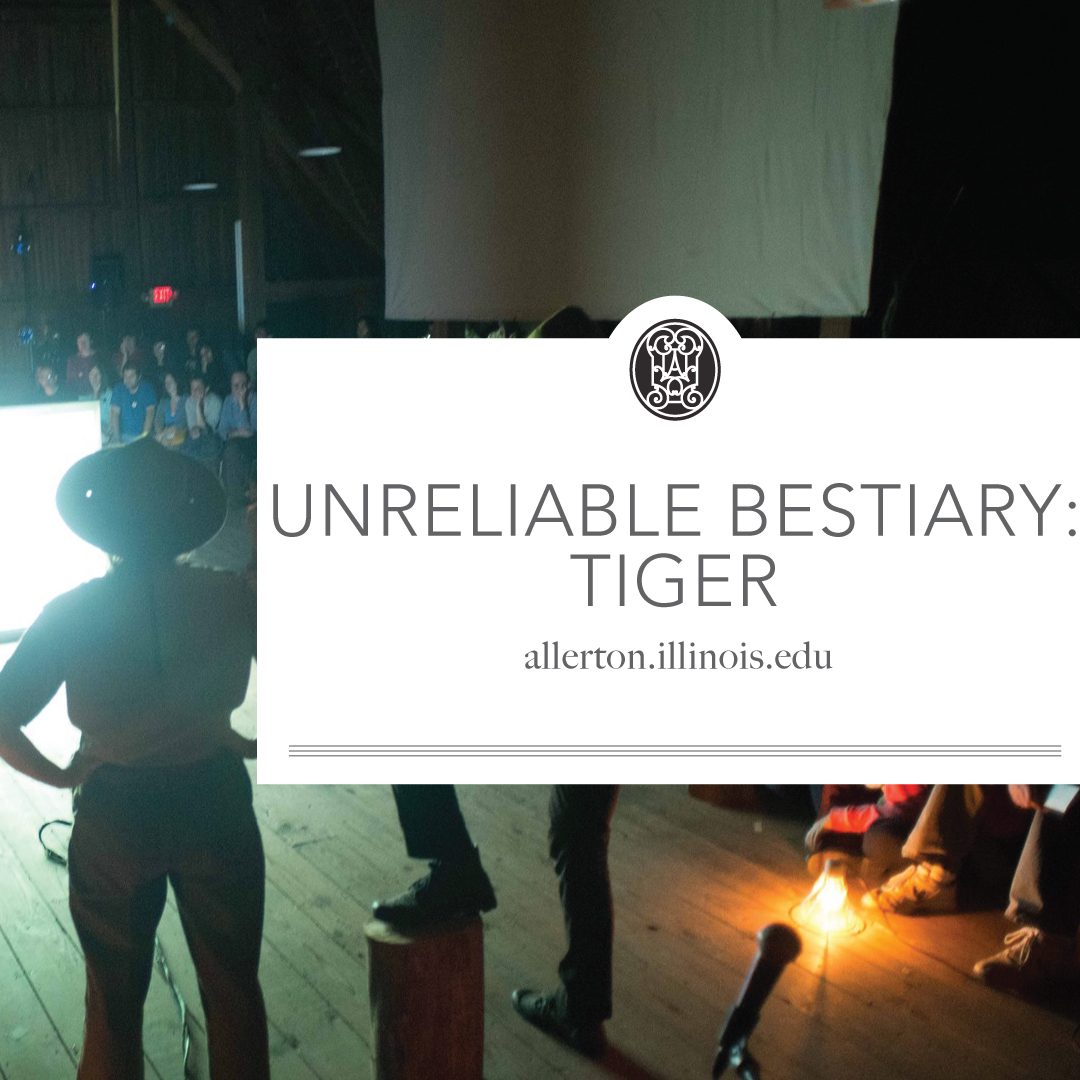 TIGER is the 5th performance from Deke Weaver’s life-long Unreliable Bestiary project: a performance for each letter of the alphabet, each letter represented by an endangered animal or habitat. Built for small theaters, living rooms, and barns, TIGER is more intimate than it’s sprawling older brothers MONKEY, ELEPHANT, WOLF, and BEAR. Part Spalding Gray, part Laurie Anderson, TIGER might feel like a travelogue, a séance, a Parisian salon: dark thoughtful humor for the anthropocene.

Based in years of research, TIGER has grown at the edges of environmental conservation, advertising/public-relations, and climate collapse, juxtaposing ecotourism with the villagers who are forced to compete with endangered predators for diminishing resources. I spent time in central India’s Pench National Park, one of India’s last sanctuaries for wild tigers. To the south and east of Pench lies a different kind of tiger habitat. Perched on the edge of the Bay of Bengal, straddling the border of India and Bangladesh at the mouth of the Ganges River Delta, the Sundarbans is the largest mangrove forest in the world. The Ganges starts in the glaciers of the Himalayas flowing south and east for 1600 miles. These glaciers are on track to be completely melted away by 2050. At 2.5 meters above sea level the Sundarbans (and most of Bangladesh) is highly vulnerable to rising seas. So, at one end of the river, the ocean is rising. At the other end, the ice is melting. In between, throughout the Ganges River Basin, lives nearly ten percent of the world’s human population.

The Sundarbans is home to a population of tigers that have adapted to the swampy tide lands, taking on remarkable aquatic attributes. For centuries, these tigers have included human beings in their diet. During the mid-90’s India’s Forestry Department hoped to reduce the number of tiger-induced human fatalities in the Sundarbans. The department laid down the law. Any group of workers going into the forests of the Sundarbans would be accompanied by a gunin – a shaman. What’s it like living in a place where 25 to 300 people a year get eaten by tigers? What’s it like living in a world where including a shaman in a work party is simply practical?

This fall, I’m touring TIGER along the Mississippi and some of its tributaries, starting at the headwaters in Bemidji, Minnesota and moving down to the Gulf – mirroring antipodal progress down the Ganges – a river on the other side of the world and home to most of the last wild tigers on the planet.

Admission is free with a suggested donation of $5/person. Register here!
Please note this event has limited seating available. We suggest arriving early to secure seating.