MONTICELLO — As the son of a theology professor, it seems appropriate that musician Pierre Lacocque describes his first exposure to blues as “a religious experience.”

It came five decades ago when the then-16-year-old Belgian immigrant snuck into a Big Walter Horton concert at the University of Chicago.

“I had never heard the blues before,” said Lacocque, whose Mississippi Heat will headline the Reds, Whites & the Blues Concert at Allerton Park and Retreat Center in Monticello on Friday, July 1.

“I call it a religious experience because it was life-changing for me, and that’s where it began,” Lococque said.

As a 1979 Monticello High School graduate, Galt has a long history with the park.

“It really means a lot to me to play at Allerton, because I grew up hiking the trails, and still get out there all the time,” said Galt, also a full-time musician.

“When not performing, I still take my guitar out and play at Allerton just for fun. It’s a beautiful sound in the Sunken Garden,” he said.

The July 1 concert will be on the Gatehouse Lawn and is part of the 2022 Allerton Concert Series Presented by the Ayers Family. After the Blues Deacons finish their set, Mississippi Heat takes the stage at 7:40 p.m.

“The Fourth of July is one of my favorite holidays, and I’m looking forward to celebrating it at the Red, White, and the Blues concert with the community listening to some great blues music,” said Allerton Park and Retreat Center Program Coordinator Olivia Warren.

“Billy Galt, a Monticello native, will be here and Mississippi Heat will be giving a neat Chicago spin on the blues,” she added.

Gates open at 5 p.m. A $5 donation is suggested ($10 per family). Food will be available for purchase. In addition, Allerton’s Greenhouse Cafe will remain open until 6 p.m. for attendees to purchase food and beverages prior to the concert starting. Those attending can also bring their own food.

Lodging is also available that night on the Allerton grounds. Call 217-333-3287 for information.

For more information, go to www.allerton.illinois.edu.

Billy Galt and the Blues Deacons 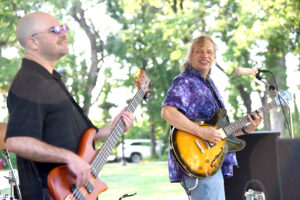 Galt calls himself a “late bloomer” musically, not picking up the guitar until his 20s.

He hasn’t looked back since, and between the Blues Deacons and solo gigs estimates he has played “about 30 concerts per month all year.”

The guitarist and vocalist credits picking up the guitar quickly with a “crazy manic practice mentality” that started with high school basketball.

“I was almost OCD about trying to be good at sports,” he said, transferring that passion later into his music.

The Blues Deacons have been a mainstay in the downstate Illinois blues scene since forming in 1990. They play what Galt calls “authentic, really cool down-homey blues,” with influences ranging from Magic Slim to Eddie C. Campbell and Albert Collins.

Galt has done his share of traveling as a musician, backing performers Homesick James, Sonny Boy Williamson Jr. and Shirley King, the daughter of B.B. King.

But he most fondly remembers simpler gigs with a traveling street band in Chicago, saying he likes music to be more up close and personal, ones similar to the outdoor venue at Allerton.

“You’re just out there, no middleman between you and the people,” Galt said.

More information about The Blues Deacons can be found at www.bluesdeacons.com.

Mississippi Heat has traveled the country playing “traditional blues with a unique sound,” according to Lacocque, who immigrated from Belgium to Chicago when his father accepted a tenured job at the Chicago Theological Seminary.

Upon discovering the genre, he began absorbing the Windy City’s vibrant blues scene, leading to the formation of Mississippi Heat some 30 years ago. The five-piece group travels extensively, including concerts this year in New York, Florida, Chicago and throughout the Midwest. They also have several dates set in Canada in July. 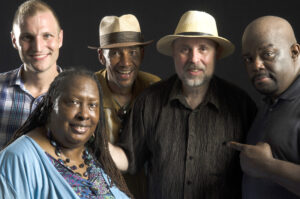 They have also performed at the House of Blues in Chicago and at international jazz festivals.

“We write a lot of our own material, influenced by 1950s blues, but also add in other styles such as reggae, Santana, in a bluesy concept,” Lacocque said.

“I like variety but stay close to and respect traditional blues.”

A good example of that variety is the band’s most recent release, “Madeline.” Besides the traditionally blues title song, it includes “Lucky Star,” which adds saxophone and crisp group vocals in an upbeat 1950s jazz/rock feel.

Mississippi Heat will take the stage at Allerton with Lacocque on harmonica, lead vocalist Sheryl Youngblood, Shoji Naito on guitar, Ricky Nelson on bass and vocals, and Terrence Williams on drums.

More information on the band — including its 13 recordings — can be found at https://mississippiheat.net/.