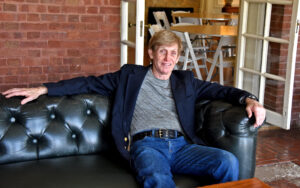 A Sangamon County resident, U of I grad, and Allerton Park and Retreat Center enthusiast has pledged approximately $1.1 million of his estate to the park, which will be used for future upkeep for both the 1900-era mansion and the park’s 1,500 acres of natural areas, as well as ongoing upkeep of its gorilla statue.

Park officials have announced the gift from David Taylor, a civil engineer who said he has enjoyed the melding of art and nature at Allerton for decades.

“There are very few places — I think in the world — where you can have a piece of nature where you’re walking a trail somewhere, and all of sudden you come to a little clearing, and there is a work of art there,” Taylor said.

“The Centaur, the Sun Singer, the Gorilla and the Bear, I appreciate all of them.”

He remembers his initial trip to the park as a University of Illinois engineering student, which led to a chance meeting with the Gorilla Carrying Off a Woman” bronze while hiking on one of its 14 miles of trails.

“It was the first artwork I saw, and it surprised me. I liked it. When I saw it, I was really impressed, because it was so unexpected,” Taylor said of the 1887 work, located on the park’s orange trail between the Main Parking Lot and the Fu Dog Garden.

Now Taylor’s estate will provide an endowment for perpetual upkeep of the statue, with other funds dedicated to costs associated with both the mansion and natural areas.

“I think David’s experience is unique, because a lot of people who go to the natural areas don’t experience the house as much, and vice-versa,” Allerton Park and Retreat Center Director Derek Peterson said.

“There’s sometimes a disconnect, and David has really enjoyed both pleasures of Allerton that exist.”

As the owner of a house and forest acreage east of Springfield, Taylor understands the work involved with maintaining both older structures and natural areas, especially when it comes to controlling invasive species.

“Letting it be natural is a lot of work,” Taylor said.

“I can’t think of a better way for my estate to help future generations, with the style and quality offered here. Not only is that going to take a lot of volunteers and time, it’s going to take money,” he added.

“Moving forward, there’s no time like the present for taking time for opportunities to move some things forward to the next generation. Just like David’s property, it takes a force to take care of it, and to encourage appreciation of it,” he said.