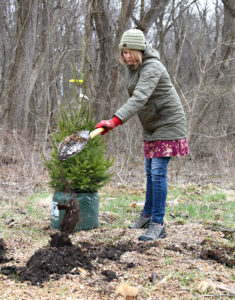 MONTICELLO — Thanks to donors — and volunteers willing to get their hands dirty — the re-planting of Norway Spruce trees along the Allerton Park and Retreat Center Evergreen Allée is ahead of schedule.

Five volunteers helped Allerton Assistant Facilities Manager Micah Putnam get a good number of trees in the ground the morning of March 29.

And they made good time.

“We planted 30 trees. We got them all in the ground in about two-and-a-half hours,” Putnam said.

It is the third year of a long-range plan to replace trees that were dying or lost during storms. Five Evergeen Allée trees were victims in a 2020 storm, 50 at the park overall.

The project has planted about 90 trees in three years, about halfway to its goal. An adopt-a-tree program that encouraged patrons to donate $225 for each new tree has helped accelerate the project, which originally was estimated to take as long as a decade.

The Evergreen Allée on Old Levy Road is one of the first impressions visitors get when they enter the park through its main entrance off of Allerton Road. Once that entrance reopened in 2012, ‘sprucing’ up the roadway became a focus.

It will take a while for the trees to reach their full height — some of the current ones are 110 feet tall. Depending on climate, they grow at a rate of 13 to 24 inches per year.

The most recent tree planting was easier for some volunteers than others. Putnam said he got nine in the ground, mainly because he did not hit any root remnants.

“Some of these other volunteers hit these tree roots, and it took 40 minutes to plant one tree.”

Read more about the replanting program at https://allerton.illinois.edu/allerton-replanting-historic-evergreen-allee-with-help-from-community/.