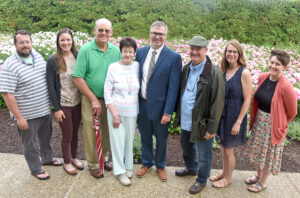 MONTICELLO — A crowd gathered in the Allerton Park and Retreat Center Peony Garden on Thursday, May 26 to dedicate the iconic, much-visited area of the park that explodes in color each spring with 50-plus varieties of peonies.

Although the gardens date back some 80 to 90 years, it was more recent developments that prompted the celebration. One was an accessible pathway installed in the garden last fall, allowing for easier access. 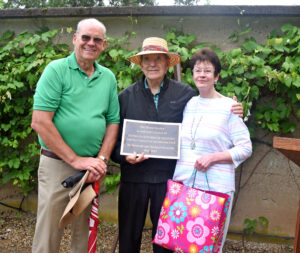 The second was a hearty thank you to Deborah and Michael Westjohn, who helped finish up a crowd-funding campaign to fund the path and set up an endowment for the future care of the peonies.

“The Westjohns clearly understand the importance of endowing these spaces at Allerton so that they are supported in perpetuity, so that our children, our grandchildren will enjoy it the way we do,” said Mindy Brand, Allerton’s Assistant Director of Annual Fund and Programming.

Brand also thanked all donors large and small for raising $25,000 at the Picnic with the peonies event in 2021, in addition to the online campaign.

“People came out and had picnics, and they gave; and if they couldn’t come, they gave online, and we were able to get most of the way toward this accessible walkway.”

“We were able to take the gifts of many and make a really big impact,” added Allerton Director of Advancement Bridget Frerichs.

Michael Westjohn said Allerton is not only important to him, but to many as a place of respite, especially in the wake of the pandemic.

“People want to get out; it’s been too long. This is a place where people can come, people are sitting on benches having lunch, they’re in the meadow playing with their kids, playing games and having a picnic with their kids. That’s what this is all about here.” Westjohn said.

His wife Deborah agreed, becoming emotional when telling the crowd what the park means to her.

“I have memories from childhood, and I want other kids to be involved at Allerton, and to play and enjoy. And then maybe they’ll be up here talking,” she said.

“I can’t say enough about my friends, Deborah and Michael Westjohn, and their many, many impactful gifts they’ve made to the park,” added Allerton Director Derek Peterson.

The Westjohns also surprised Bruce Hannon — who was present at the event — by dedicating their endowment to Bruce and his wife Pat for their help in stopping the Oakley Dam Reservoir project 50 years ago, one that would have flooded about half of Allerton Park.

“I want to say thank you to Bruce and Pat for doing that,” Michael Westjohn said. “This place would not be what it is if the Oakley Dam had been put in.”

Brand has given live Facebook updates from the Peony Garden the past two springs, mostly due to the massive public interest in it.

“Folks are so interested, and obviously it is a very special place not only because of how amazing the blooms are but also because of the dedications that have been made,” Brand said. 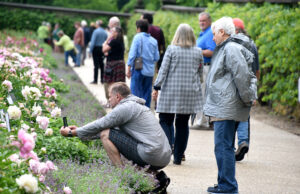