Made possible through a gift from Fred Spannaus and Connie Requarth in memory of Olive Wise Spannaus (1916-2018), the Olive Spannaus Education Series highlights underrepresented communities in art, nature, and history, through sessions led by members of those communities. 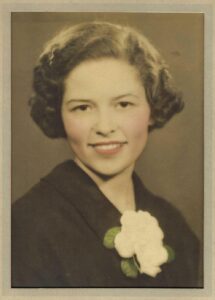 Olive Wise Spannaus was born in St. Louis and graduated at the top of her class from Normandy High School in 1934. At the time, Washington University awarded scholarships to Normandy valedictorians. All prior winners had been boys, and the high school declined the scholarship rather than offer it to a girl. In a foreshadowing of Olive’s feminist bent, her mother Bertha Wise raised a ruckus, and Washington U offered Olive a scholarship for descendants of Union soldiers in the Civil War, her grandfather having served in the Union infantry.

Olive and her husband, the Rev. Ruben Spannaus, lived in southern California (1939-1942), Seattle (1942-1957), and in Elmhurst, Illinois from 1957 to 1978. In every location, she was active in civic and religious affairs and advocated for racial justice and women’s rights. During the Elmhurst years she wrote a hymn for equality, “God of All Nations, Grant Me Grace,” that appears in several hymnals today. With Ruben, she created a live presentation, “The Shalom Woman versus the Total Woman,” that they delivered to church groups throughout Chicagoland.

She was President of the DuPage County League of Women Voters and the Elmhurst LWV Chapter, and she served on the Illinois State LWV Board. In that capacity she led a large conference in downtown Chicago about the recognition of China. Working with the LWV and the National Council of Christians and Jews, she authored and presented a series of workshops “Rearing Children of Good Will.” She served on the Elmhurst Human Relations Commission and was on the first steering committee of DuPage Environmental Council. In 1970 she coordinated the DuPage Earth Day Community College and Seminary teach-in.

Olive and Ruben returned to Seattle in 1978. She spent her remaining 40 years active in the Lutheran church and in the community. She served the Seattle LWV as publications director, coordinator of phone volunteers, membership chair, administrative vice-president, columnist for monthly newsletter, and wrote songs for special occasions. She received the LWV-Seattle Carrie Chapman Catt Award in 1995.

At the age of 80, she took up line dancing, in part to maintain her excellent physical condition, and in part to sustain her mental acuity (having heard that dancing, and especially dancing backward, was good for the brain). She taught line dancing classes well into her 90s. Her attitude and her demeanor remained predominantly cheerful and upbeat to the very end of her life. Olive passed away quietly in her sleep at the age of 102 on the morning of May 10, 2018.