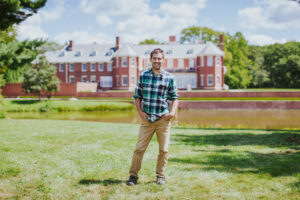 CONGRATULATIONS TO PETER LICHTENBERGER, who until recently was Allerton’s park supervisor, for being one of eight recipients of the 2022 University of Illinois Urbana-Champaign Chancellor’s Distinguished Staff Awards.

He was cited for exceptional work that included volunteering for odd shifts in support of special events, knowledge of tasks, timely implementation, and elevating the skills of his employees and volunteers.

Lichtenberger said he was “very honored to have received this award. Honestly, working hard in my role at Allerton over the years came easy to me — the incredible staff team I was surrounded by, along with the beautiful setting of the grounds was a perfect motivator! I’m grateful for the opportunity of using my skills and talents to influence and inspire those who come to the park.”

A U of I press release cited several areas where Lichtenberger excelled, helping him earn the Distinguished Staff Award.

“Lichtenberger’s knowledge and expertise enable him to teach classes on gardening and horticulture online and in person for the Master Gardener Program, school groups, public workshops, and Facebook videos,” said a press release from the University of Illinois Urbana-Champaign News Bureau.

“He took the initiative to research the native seed mix used at the solar field on the U of I campus so the same mix could be purchased and planted at Allerton Park’s solar field.”

During his 10 years as an Allerton employee, Lichtenberger became a certified arborist and a licensed pesticide applicator. He also took online horticulture classes through the university.

Permanent civil service staff members with at least two years of service and retired employees in status appointments during the calendar year may be nominated for the award. A committee recommends finalists, who Chancellor Robert Jones then approves.

Recipients receive $1,000 and a plaque, and their names are also engraved on a plaque displayed in the Illinois Human Resources Office.

Pete moved on to other opportunities this summer, but Allerton and the University of Illinois appreciate the time he devoted to the park!

You can read the entire article on all eight recipients here.