MONTICELLO — Pleasing the crowd is an overriding desire of Last Minute, the Central Illinois-based rock and roll band that will open the Allerton Park & Retreat Center Concert Series Presented by the Ayers Family at 6 p.m. Friday, June 3.

To the point you may end up dancing with some of the band’s lead singers as the group plays classic rock tunes.

“We try to keep the crowd going. We’ll jump out with the crowd and dance with people,” said Jadie Sanchez, a singer in the seven-piece band.

The band will kick things off for the monthly concert series — starting with Friday’s ‘LOVE FOR ALLerton’ entry, on the Gatehouse Lawn of the Monticello-area park.

Following Last Minute on the stage will be Green Diamond Express, another rock band that will take the stage at 7:30 p.m.

It’s not the first time Green Diamond Express guitarist Eric Forsberg has played at the park. But this time it will be on an actual stage.

“As kids, we would go hiking the trails, and find someplace to sit and plunk around on our acoustics,” Forsberg said. “So, I’ve had my guitar on the grounds, but about 20 years ago.”

“We play everything from Johnny Cash to the Grateful Dead, Rolling Stones, Tom Petty and Bob Dillon,” Forsberg said.

There is a $5 suggested donation to attend the concert; $10 per family. Attendees are encouraged to bring lawn chairs or blankets to sit on. Food will be provided by Piato To Go and Jimmy John’s.

Lodging is also available on concert weekend on the Allerton grounds. For more information, go to https://allerton.illinois.edu/lodging/.

Last Minute just reached its first anniversary as a band but has compiled a large book of tunes in that amount of time. You’ll hear songs by Joan Jett, Carole King, the Eurythmics, along with a few originals sprinkled in. 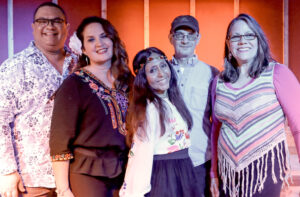 “We played LaBamba as a joke, and it has become one of our number one songs,” Sanchez said.

And in its theory that pleasing the crowd is paramount, the song stuck.

Part of wanting to play to the audience as much as possible is due to the pandemic when crowds were definitely not encouraged.

“Everything started to open up, so we wanted to respond with crowd-friendly songs,” said bass player Dawn Rambo.

Virginia Jurado is the other lead singer, but it didn’t start that way. She started as a choreographer, teaching dance moves to the band, and it morphed into the singing and percussion gig.

“The Doc Shred extended solo could come at any time and in any song,” quipped Jadie. “That’s when the singers take a break.”

More about the band can be found on its Facebook site, https://m.facebook.com/LastMinutemusic/about/?ref=page_internal&mt_nav=0.

Green Diamond Express is named for a train that one time traveled through Central Illinois, including Forsberg’s hometown of Wapella. 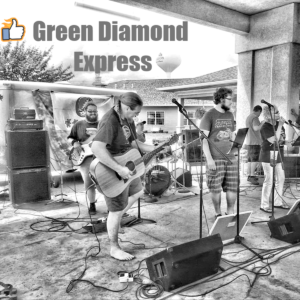 He noted all of the band members have day jobs. Forsberg is a soil specialist, while co-founder and bass player Greg Hale is a plumber.

“We’re all working guys. We’re not trying to break down walls and get on a tour bus. It’s for fun, and we play the music

The beginnings of the band date back to 2007, when Forsberg moved back to Central Illinois and ran across middle and high school buddy Greg Hale.

“Greg said, ‘we should get together and jam sometime,’ and we haven’t stopped since,” Forsberg said.

Find out more about Green Diamond Express at https://www.facebook.com/GreenDiamondExpressWapella/.