CHAMPAIGN — Karen Wood of Champaign has been “cooking up” spectacular holiday gingerbread displays for Einstein Bros. Bagels at 901 W. University St. in Champaign for 11 years, and her 2022 creation — which features Allerton Park — is her biggest yet.

At 5 feet wide, 28 inches tall and 20 inches deep, it likely maxes out how large she can go unless she finds more baking space.

“That’s about as big as I can go, because I have to be able to fit it in my ovens. So that’s kind of my limits,” Wood said.

Assisted by Carol Lake, the gingerbread artwork took about 80 hours to complete and includes stunning detail, including the Allerton Mansion, Fu Dog Garden and Avenue of the Musicians.

There are 15 little trees hidden in the display. The candy fu dogs were made with a dachshund mold Wood had purchased earlier. 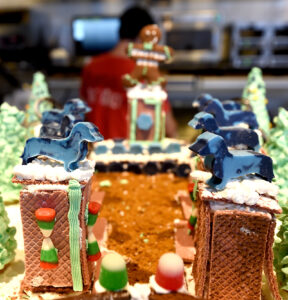 “I used to have a dachshund, and I picked up the mold with thoughts of using it somehow in my gingerbread. It was meant to be!” Wood said.

She started making gingerbread creations 15 years ago, originally giving them to friends and family. As they got more intricate, she noted that “no one else could see them. That was the idea of bringing them into Einstein. They loved it, and they got bigger each year.”

As a nod to the location of the display, the gingerbread people located throughout her creation are named after employees at the business. Even the Santa in his sleigh atop the mansion is named after the owner’s son, who of course happens to be named Nick.

Gingerbread crumbs were used for dirt in the gardens, and the mansion roof — made of cinnamon crunch cereal — took four hours on its own to complete.

Not satisfied with a 28-inch high mansion, she added the Fu Dog Garden to the left and the Avenue of the Musicians to the right.

“I really enjoyed adding the garden details to the mansion, making this one of my favorite displays,” she said.

There are difficulties in keeping a baked good looking fresh throughout the holiday season. Her goal is to keep it on display through the end of December, so she will make occasional visits to initiate necessary repairs.

“Keeping it intact can be difficult. At Einstein, the door is opening and closing, and the heat and cold dries it out,” Wood said.

In the past, Wood has also displayed tasty re-creations of the Twin City Drive-In, Virginia Theatre and Burnham Hospital.

“I do keep them a surprise. That’s part of the fun.”