“You can be sure that we’ll be up for a fun time,” said Oisín Mac Diarmada, the fiddle player for Ireland-based Téada, which will kick off a stateside tour at Allerton.

“There will be plenty of lively music, and it will be good for all age groups. People play and listen from the a

ge of four or five up to their 80s or 90s. it’s a lifetime of work enjoying this music.”

Téada will take the stag

Born in Ireland but a nearly lifelong resident of the United States, Hagan said Irish jigs and reels resonate with those in the U.S. as a result of their links to the Emerald Isle.

“The United States has so many people with Irish heritage, so it’s meaningful to them,” Hagan said.

Broken Brogue bandmate Neal Smith, a Millikin University music professor who plays the whistle, pipes and piano, says a lot of music in this country has ties to traditional Irish songs.

“A lot of American m

usic traces its roots back to Celtic origins: Country, bluegrass is rooted in a Celtic tradition. So it really speaks to a lot of Americans. And it’s fun,” Neal said.

A donation of $5 per person, $10 per family is suggested for Irish Fest, part of the Allerton Concert Series Presented by the Ayers Family. Attendees should bring lawn chairs or blankets for the outdoor venue.

Food will be available from Mama D’s Smokehouse and BBQ, Watson’s Food Truck and Jimmy John’s. Allerton’s Greenhouse Café will also be open until 6 p.m. for pre-concert food purchases. Concert goers can also bring their own food.

A cash bar will be available. Those wishing to stay overnight on the Allerton grounds can find information at www.allerton.illinois.edu or by calling 217-333-3287.

Téada is a six-person group with a 21-year history. Its name means “strings,” but vocalists were added along the way.

Mac Diarmada said the band always gets a good reception during its tours in the United States. 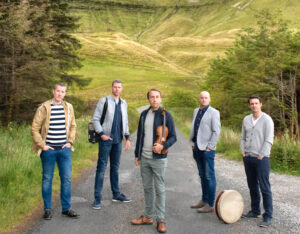 “We’re particularly lucky with Irish music in that it travels so well. Probably part of that is that Irish people have traveled all over the world,” he said.

Téada has also been all over the world, including a 7-week tour of Japan and Taiwan, and at music festivals across Europe and in Russia, the Middle East, North American and Australia.

Despite the lofty resume, the band tries to stay down to earth, said Mac Diarmada.

“It helps that Irish people are, hopefully, associated with a good time, and I think our music is similar.

And, if you feel like dancing, that activity is encouraged.

“We love people who come up and let off a bit of steam, to dance around. You don’t need to sit there and be super quiet and attentive. We like to have a bit of fun during gigs,” Mac Diarmada said.

He also likes to teach people some of the classic Irish jigs and reels, like “Mountaintop” and “The Lark in the Morning.”

“That’s where we come from. Some are familiar, some are forgotten with time, and we like to present those to new people and new audiences all the time and keep this music alive. It’s a beautiful thing to see,” said the band leader.

Band members who will play at Allerton include Mac Diarmada on fiddle, Paul Finn on accordion, Seán McElwain on guitar and Samantha Harvey on piano.

For more information about Téada, which released its sixth recording this spring, go to https://teada.com/.

The name of the band points directly to Hagan, who was born in Ireland but has spent most of his life in the United States. So, while he has no Irish accent when he speaks, it creeps in some when he sings.

“It’s really a reference to Thomas and the fact that he doesn’t have an accent,” Smith said.

Hagen light-heartedly adds that, except for calling Illinois’ largest city Chi-CAR-go into his college years, his dialect is gone.

“My Irish accent is broken,” he joked. 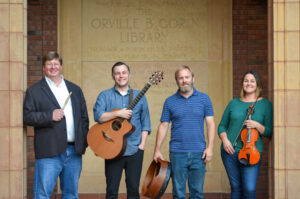 The four-piece group — which also features Jeff Elvin on bodhran and backup vocals and Tara Ulis on fiddle — has played the Millikin Vespers for several years, but saw its demand rise recently, especially since pandemic-related precautions began to ease. They are now playing across the area, including the Peoria Irish Festival and the Highland Games in Springfield.

Broken Brogue also played at Allerton last summer, one that saw an altered concert schedule aimed at keeping crowds down.

“We thought there wouldn’t be many people there and it was packed. It was wonderful. It’s a beautiful place to play,” Smith said.

Find out more about the band at https://www.brokenbrogue.com.