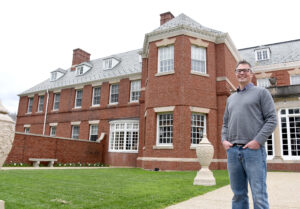 From Allerton Park and Retreat Center Executive Director Derek Peterson, talking about one of his main business role models:

“The one and only Lou Liay,” Peterson says. “Not only is Lou an impressive Illini, he has an energy and work ethic that I tip my hat to. His past successes with the Alumni Association and his constant ability to bring people together for a greater good are truly inspiring. Lou Liay is one of a kind.”

In News-Gazette Editor Jeff D’Alessio’s April 24 edition “Beyond the Boardroom,” the Allerton director also talks about his philosophy regarding meetings, favorite moments in his 16 years at Allerton, even why he drives old cars…