Barber (#BarberPaintsPpl) is one of Allerton’s recent spring artists in residence. A native of Detroit, he is spending time at the park during a Midwest Tour, gaining inspiration to craft abstract paintings.

The Midwest-based artist uses a unique method of codifying the human form into geometric shapes and lines — think stick-like figures — to help avoid stereotypical perceptions of the body, with the goal of allowing the viewer to determine the figures’ social and cultural identities for themselves.

We asked Barber some questions about his work and his time at Allerton.

Where did you grow up?
Barber: I grew up in Midwest America on the west side of Detroit, Michigan. 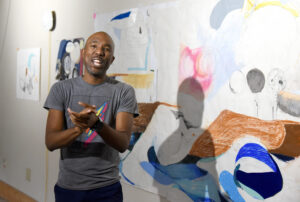 Barber: I consider myself regional. I’m a Midwest artist residing in Chicago.

Why did you apply as an artist-in-residence?
Barber: I’m happy to have the city of Monticello be one part of my MidWest Stand Up Tour. Applying to Allerton was an opportunity to go deeper into the heart of the country, possibly uncover another nuance to America. I must admit Robert Allerton situating himself in a sea of acres when he had a sprawling metropolis at his disposal sparked curiosity. Additionally, my hope was for respite. Having completed a 6-week artist residency in Mexico City at Fortuna, I was looking forward to having a space for contemplation.

Explain your art to us.
Barber: My goal as an artist is to afford succeeding generations an easier transition into adulthood than I had growing up.

Do you have major influences on your work you would like to list?
Barber: The United States of America’s first cultural offering was jazz. There was nothing like it anywhere else on the globe, and societies the world over treasured it as such. Black culture remains innovative and America’s greatest export. For this reason, Black culture continues to be a significant influence on my work.

Have you enjoyed your time at Allerton? Why?
Barber: Allerton Park and Retreat seem closer to the night sky than Chicago. Walking from my studio, the soon-to-be visitor’s center for Allerton, I sometimes catch the stars singing loudly in the night sky. The Sangamon river, trails, and flowers all have been sources of inspiration for my practice.

Where can people buy/access your work?
Barber: BarberPaintsPeople.com is how to view my work. @UniteUsOne on Instagram is the best way to follow my work. Interested buyers may email LTB_11@hotmail.com or DM on IG for purchase or to arrange speaking engagements.

What comes next?
Barber: During my time here I completed work “somewhere between Mexico and Chicago”. Before delivering this piece and others to Galeria 54 in Mexico City, Mexico, I’ll be showing four separate works at SooVAC, a visual art center in Minneapolis — the 7th stop of my Midwest Stand Up Tour.