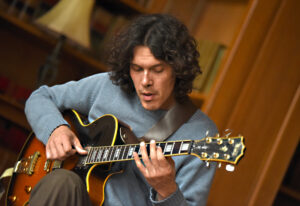 As a matter of fact, it is leading to a park-themed musical suite that is already being recorded. More on that later.

Those wanting to hear Gobbo perform have two chances over the next week: A Facebook online session from the Allerton Mansion at 10 a.m. Thursday, March 31 (https://www.facebook.com/events/3192641880976254), and from 12 to 1 p.m. Wednesday, April 6 at Allerton’s Greenhouse Café.

We asked José about his background, musical passions, and what’s next for the talented musician.

Q: José, where did you grow up?

Q: Where do you live now?

Q: When did you graduate from the University of Illinois?

Gobbo: August 2020. It was the pandemic early days, so I knew they wouldn’t give me an F.

Q: Why did you apply as an artist-in-residence?

Gobbo: I have always been seeking opportunities to play music, because that is what I love the most, and I figured the more you do it the better you get.

The marketplace for that lifestyle can be terrible, depending on the angle you take. I’d bet $2 that if you ask any student at UIUC right now, they’d say there’s no place to play and no money. I think if you look closer, you’ll find some people making it work.

Diversity of approaches can help, so instead of just playing in the same clubs and expecting the audience to tip better, I started looking for grant applications and talking to open-minded people interested in arts.

To answer your question more directly, I’m pretty sure I saw the Artist-in-Residency program call for artists on Facebook back in 2020. I applied then but didn’t get it. Applied again 2021, was a finalist but still didn’t get it. 2022 I’m finally here.

Q: Were you familiar with Allerton prior to the residency?

Gobbo: Not much. I’ve played at one or two wedding receptions with professor Chip McNeill, and asked my friend Peggy Pennell (who loves the park and knows all about it) to drive me around in preparation for my residency interview this year.

Q: Explain your music to us.

Gobbo: It’s a combination of everything that I’ve heard, filtered by every experience I’ve had in life. There’s a quote by Wayne Shorter, something like “play the way you think the world should be.”

Q: When you sit down to play just for your own enjoyment, what style or songs do you default to?

In terms of style, I guess I can say jazz, but I’d rather mention some of my favorite musicians instead of a style: Keith Jarrett, Toninho Horta, Herbie Hancock, Guinga, Miles Davis and Antonio Carlos Jobim,  Shostakovich and Monica Salmaso.

Q: Have you enjoyed your time at Allerton?

Q: How long is your residency?

Q: Do you have recordings available?

Gobbo: Yes! You can find three albums by searching “José Emilio Gobbo Junior” on Spotify (Spotfail). There is a lot of music my personal YouTube channel, and also my main group’s, “The House Trio”.

Q: What comes next?

Gobbo: I’m developing/recording a solo guitar album here at Allerton Park. So far I have six songs to be performed as a suite, the “Allerton Suite”.

I’m very grateful for the opportunityand hope to keep collaborating with Allerton Park until the end of times!

Q: Tell us more about the Allerton Suite!

Gobbo: I have been developing some compositions that fit a solo guitar format. There are six recognizable pieces, but I will improvise the transitions from one to the other. Also, I’m pretty sure there will be mistakes during the recording, which I’ll try to incorporate to the piece and work my way back into the original road map. At least that is the plan for now!

I already did one recording session yesterday and will do another tonight. The library sound is magical!